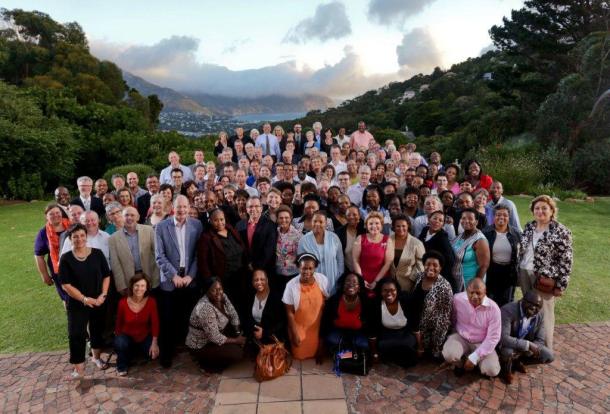 This week is the one year anniversary of my meeting Stephanie Diakité for the very first time.  It truly was kismet!  My husband and I are bargain travelers and at the time we lived in the Washington, DC area.  We found an amazing deal to South Africa and, being the librarian I am, I sought out and found a conference taking place at the time we would be there.  I reached out to them and was offered a chance to present on a panel about a librarian community I had built, INALJ.  Also on that panel was T160K founder and keynote speaker, Stephanie Diakité!

We chatted the day before our joint presentation, which I covered in an article called “We Built a Community!
Presenting at the 5th annual OCLC EMEA (Europe, Middle East and Africa) Regional Conference, in Cape Town, South Africa, Feb. 24, 2014,” and then the next evening after dinner on the bus ride back to the hotel.  From that conversation the seeds for my involvement in the fledgling, new, T160K crowdfunding platform grew.  All because of that chance meeting in Cape Town, South Africa.  You can view Stephanie’s full Keynote, Community Action – To save the Timbuktu archives in Mali, on OCLC’s YouTube page.

So what was the BIG Idea we came up with in Cape Town?

We talked about actively seeking out librarians and archivists both in Mali and globally to work with us on cataloging the Timbuktu manuscripts.  The project that Abdel Kader Haidara launched to catalog the rescued Timbuktu manuscripts would be one we could crowdfund for together.  In late 2014, less than a year after first meeting, we launched the new T160K crowdfunding platform and have over 100 donors to date!  And each day we add more as our global community shares and participates in this amazing project.  I am so grateful for that day, February 24, 2014 in Cape Town where I met Stephanie and so very grateful for all the community members and partners I have met through T160K!  Onward and upward!

The group shot of all the OCLC participants is used by Naomi House with permission of OCLC (from her INALJ articles in 2014).  The other photos are by Naomi House.

How some savvy librarians saved the Treasure of Timbuktu

“They broke our instruments.” Preserving African music in a time of war